The Safepath Emergency Evacuation System is a mass notification communication system customized to meet your specifications and budgetary needs.

It is the season of change and transition now that finally the weather is getting warmer after a long winter. The snow is melted and it is being exchanged with sunshine on a good day or rain on maybe not such a good day. 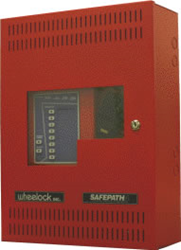 In any event, it is obvious to most that the calendar is at mid-season. This can be great news; however, with transition there are always challenges.

Tornadoes are one of the most deadly weather systems that mankind has to endure. They are still very unpredictable and unstable forms of weather. Through technology and science meteorologists have made great advances in determining where a tornado may hit next, but it still remains difficult to calculate how much time a community has to take cover once one touches down.

Employers of large industrial and manufacturing facilities have a lot of space and need to make sure that employees are notified in time to take cover during an emergency weather episode like this.

This is especially difficult as some of these companies have large amounts of employees spread out amongst equipment and offices. They cannot depend upon just a word of mouth approach as every employee may not be accounted for in such an event and they cannot be sure everyone has been informed in time.

During a tornado, employers need a tool to use to announce to their employees to take time to take cover and evacuate.